Sydney: Days 3 and beyond

Day 3 started off with a long coach ride up to the Blue Mountains. We went to a camp facility run by a program called "Full-On". It's all about getting young people to focus on being positive and overcoming challenges. We walked in to a large room where they were blasting music and letting the kids dance around. As a professional Energizer, I lent my hand to helping the quieter kids bust a move. Some of them, however, needed no help from me. 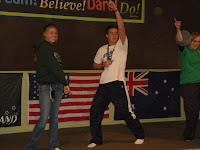 The leaders gave a brief keynote about positive thinking. Then we went outside to do a team-building activity. The students had to figure out a path across this maze without talking. I thought they did aMAZEingly well, heh heh. It was great to see them work together and build bonds. The energizing, mini-keynoting, and rec event combo taking place in the mountains, made me feel very much at home. It was a definite comfort zone. It was like Aussie Montreat, minus the whole God thing. 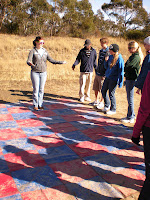 Then they began passing out equipment to go abseiling, which I thought meant sliding down a mountain on your belly. Turns out it's more like repelling. I pretended not to be freaked out about the prospect of climbing down the side of a mountain, and decided to concentrate more on how awesum my ass looked in this harness. 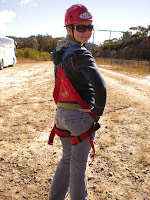 We finally climbed into the mountains to our first abseiling site. After waiting in line, and waiting in line, and waiting in line, Jess and I finally stepped up to go after all 33 of our students took the dive. I was really proud of the kids; none of them chickened out. At first I thought I wouldn't be too scared, but after getting strapped in and looking over the edge, I began to panic. This was about an three story drop, and there I was, strapped in with two pieces of rope on a skinny metal pole. Putting my feet on the edge was the scariest part. As I began to go further over the edge, I couldn't help cursing in fear, then apologizing to the students, then cursing for cursing, then apologizing for cursing at myself for cursing, and before I knew it, I was at the bottom being unstrapped and patted on the back.

After that, we hiked up to an even higher spot, where I abseiling a 20 story rock face! This was even scarier, but I was so proud of myself for doing it. The scenery was amazing and the overall experience was awesum. The hike back up to the top, however....less than awesum. 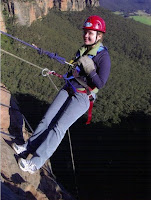 The students were pretty much exhausted, so I thought they'd all go straight to bed when we got back to the hotel that night. WRONG! One of them came up to me and told me she couldn't breathe due to a swelling in her throat. Um, okay. After a bit of confusion, we finally jumped in a cab and headed to the hospital. The cab driver pointed out that we were in the red-light district of Sydney. I mean, Aussie Montreat in the daytime and the Red Light district at night - could this trip get any better???

Basically, we entered the hospital around 10pm and came home around 3am. It was a long, arduous process. I was proud of myself for not vomiting, especially when the man in the bed next to us projectile vomitted onto the curtain separator. The next day it was off to Canberra, the capital of Australia for our homestay!
Posted by The Working Girl at 1:04 PM

You can totally handle a baby if you can handle grown-up projectile vomiting! Baby vomit is much less smelly and much less voluminous. :)