What day is it? Melbourne Updates

Melbourne was amazing. It's supposedly the "San Francisco Down Under". Although they took us to a strip filled with touristy shops, there was still plenty to see. The architecture is amazing, but mainly because of all the different styles. You'll see a traditional building, with long window, large doors and grand columns next door to some crazy geometric design. This is most noticeable in Federation Square. 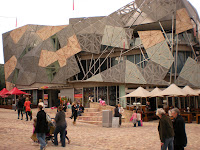 The next day it was off to Phillips Island. Phillips Island is a wildlife preserve with amazing scenery. They have a koala preserve, where I learned a lot about koalas. Here are some fun koala facts:

1. Koala's brain cavities are four times larger than their brains. This is part of the reason they move so slow. Jumping or fast movement can slosh their brain around and cause damage.
2. Koala stomachs process very slowly, so Koalas only eat small amount every day. Their daily diet is similar to one bowl of cereal for us. This also maintains their "sluggish" behavior.
3. Koala sex is really awful. The male violently grabs the female, who screams the entire time, and the whole thing is over in two minutes.
4. Koalas are prone to STDs. This is no joke. There was an outbreak of syphilis on Phillips Island during our visit. Almost doesn't seem fair after such terrible sex.

I still loved the Koalas. They were my definite favorite of all the Aussie creatures. 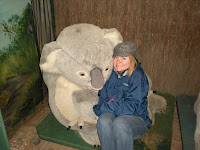 We took a tour on Phil Isle of a working farm, complete with all kinds of beautiful farm animals (sadly, no pigs). We went through the koala preserve and then went to the research building. The research building was filled with animals ... stuffed animals. And not the kind that kids love. The students help conduct experiments on dead penguins. It was a little creepy.

It was very rainy and cold on the Island, but nothing was going to keep us from the Penguin Parade! We climbed into bleachers on the shoreline and patiently waited for the sun to set. Finally, the teeny tiny little penguins popped up from the ocean waves and plopped onto the sand. This is their nightly ritual after a long day out fishing. They travel in packs. It was really adorable how they would sit and wait for the last of the bunch of wiggle out of the water before they took off toward their homes. It was definitely worth the chilly, saturating wait to see these little guys march off to their happy houses. 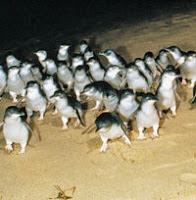 The next day was our last. For dinner, we went to the Rialto tower and gazed out on Melbourne at night. The top of the tower was extremely windy. Jess and I braved the wind; then we made a pact to come back to Melbourne minus high school students and plus pub stops. 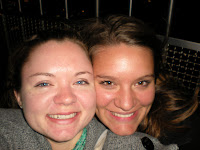 That night we had to pack our bags because it was off to our last stop!

wg
Posted by The Working Girl at 7:11 PM

So many things I never knew about koalas.