a tale of two piggies

As you may (or may not) know, a certain man keeps me company every night. He's been my companion for twenty-seven long, wonderful years. I can not sleep without him. He is, of course, my Piggy. Here are some earlier shots of me with Piggy:

Now, of course, being my bed-time (and for the greater part of my childhood, my all-the-time) companion has caused Mr. P some serious wear and tear. His bright pink, furry exterior morphed into a more senior gray tone. His adorable sailor suit is worn through in so many places that my Nanny knit him a pink sweater (also now gray) sometime in the 90s. His right arm is hanging on, quite literally, by a thread and the silky tail I used to rub at night has been missing since 1989. Some might say it's time to give Piggy a rest. Ha! Nice try, my family has been saying that to me since I was about six! However, I can't help but see the truth in their argument. If I continue to sleep with Piggy, he might not last much longer. And I, quite literally, plan to take him to the grave.

Trust me, I've looked for a substitute. I'm not ashamed to admit I've spent hours on ebay looking for another edition to my Piggy clan. It seems, however, that my Piggy was a generic, one-time only stuffed animal. When my Uncle Timmy picked him out from the bin in a drug store to give to me when I was still in the hospital, circa Nov. 20 1981, who knew he would become my favorite and most beloved childhood toy?

That's why I was shocked last weekend to come across this little fellow in Downtown Disney. 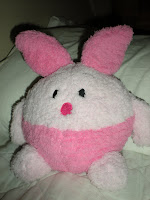 The resemblance was striking. Same two-tone horizontal outfit. Same round, chubby body. Same beady, black-eyed stare. Same soft ears and same wiggly feet. Could it be I found the '09 edition of Piggy?

I quickly purchased New Pig and took him back to the hotel room, where Piggy was dutifully waiting. (I always put Piggy on the nightstand at a hotel because I'm afraid he'll get washed with the sheets and never be seen again.) One look at Piggy and I felt like a complete traitor. How could I tell him he was about to be replaced by a newer model?

I know it is for the best to stop sleeping with Piggy. It's just doing him harm. But I just can't imagine life without him. He travels with me every where I go, and never in the checked luggage. He always hangs out in my carry-on for three specific reasons. First, he's the perfect size for an airline pillow. Second, if my luggage is lost, I still can sleep at night with Piggy by my side. Third, should the plane need to do an emergency crash landing in the ocean, I can strap Piggy underneath my life vest and make a run for it.

So, how can I face Piggy now, with this new pig in my arms? Will he understand this is for his own good? Or will he feel neglected, abandoned, and betrayed after 27 years of loyal companionship? 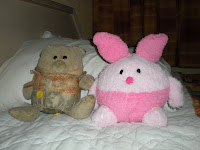 Any suggestions are greatly appreciated.
Posted by The Working Girl at 8:11 AM

I don't know if this would help, but I imagine its been quite awhile since Piggy was sturdy enough for a proper wash and is probably full of bacteria and dust mites which would not be good for you to be breathing in at night. Maybe you should get like a glass case or something to give Piggy his own place of honor in your room :)

I have a dog that I called shapes and I slept with him every night until he started to get holes in him because my real dog would try to play with him. I had to retire him, but I never did get another stuffed animal to sleep with. Maybe its because he did get replaced with my real dog.

I don't think piggy will feel betrayed because you want him to last forever. Maybe he can continue to sit on your night stand at night so he doesn't get rolled on to.

This was cute...You should turn it into a children's book! ;)

Emily - Is that led by Dr. Kermit The Frog?

Tamela - My dog learned from an early age never to go near Piggy. My dog is also 17 times Piggy's size, much too large for cuddling at night. He takes up half the bed!

Heather - Hmmm...I'll have to think about it! But not if it's like The Velveteen Rabbit - that book still makes me cry!!!

Thanks for the feedback awesum friends!!

In an effort to get to know you better, I tagged you in 8 things.